I read somewhere that acupuncture is a great way to treat stress-related headaches/migraines, hair loss, and back pain. Also, I heard that acupuncture treatment at least three months before a fertility workup greatly improves the chances of conceiving. Thus, I said goodbye to my fear of needles and scheduled an appointment with an acupuncturist.

My first visit was last Tuesday (June 28) and the acupuncturist is Sr. Regina Liu who’s famous for helping couples conceive.

The acupuncture clinic is located at No. 19 Panay Avenue within the compound of the Missionary Sisters of the Immaculate Conception of the Mother of God.

As compared to Western medicine which is focused on specialization, acupuncture offers a holistic (mind-body-spirit) solution to health problems. When an acupuncture needle is inserted, it is painlessly placed into a carefully selected point which is relational to a specific energy (Qi/chi) channel. When the flow of chi is blocked, it is associated with problems surrounding an organ. For cases of infertility, the acupuncturist will normally examine the symptoms and determine how vital energies are blocked.

Fertility acupuncture increases blood flow to the reproductive organs. This is important during that phase of the menstrual cycle when the uterine lining builds itself in preparation for pregnancy. Acupuncture also treats PCOS or problems with irregular periods, non-ovulation, or short/long ovulatory phases.

In the Philippines, there’s probably just one name that will ring a bell when it comes to solving infertility through acupuncture. The name is Shengrong Liu or Sr. Regina Liu.

My schedule last June 28 was at 3:30pm and I arrived about 20 minutes before my appointment. I was asked to fill out this form that contains questions about my personal details and medical history. And by the way, I was advised to bring the latest medical records that I have (ultrasound, blood tests, etc).

The whole clinic smells of burning wood. I learned from one of the nurses that it’s caused by the burning of this herb they call Moxa (moxibustion).

When it was my turn, I was called to enter Cubicle #8 and shortly after, Sr. Regina followed in. She asked me about my health problems and a couple of questions about my PCOS (polycystic ovarian syndrome). She also asked me to stick my tongue out… thrice!

After that, I was asked to lie on the bed and to unbutton my pants. I was just about to ask her if it hurts when I realized she has already started 😛 I didn’t feel any pain. I just felt fast tapping on the areas she inserted the needles in. I had about 7 on my head, 8-10 on my tummy, 2 per hand, and 3-4 per leg. 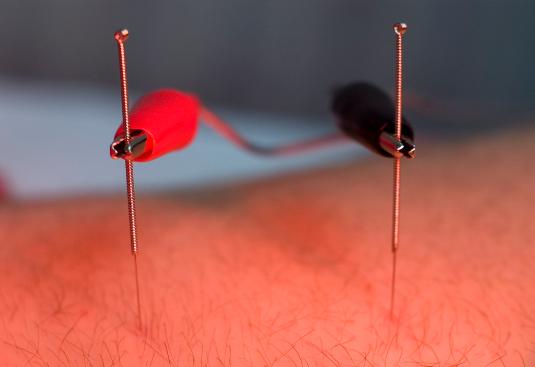 In a short while, a nurse came in to apply electricity to the needles in my tummy area. An electrical current is passed through the needles and they produced strong but bearable stimulation. It was set at a specific voltage and when my body got used to it about 10 minutes after, the nurse came back in to increase it.

The whole session lasted for about 30 minutes. Thereafter, I was prescribed to drink herbal tea an hour after breakfast and dinner and I had to drink it for the next 7 days.

As for the needles, I totally can handle them. They’re not painful at all. But as for the herbal tea… oh my, that’s the hard part for me.

I love tea but this herbal tea, no matter what I do, it just can’t make me like it. I don’t know what the herbs are because while they’re written in my chart, they’re in Chinese characters. All I know is that while they’re in powder-form, not all of them are easily dissolved. I usually get a lumpy mixture and I cry each time I have to drink it 🙁 The tea also has a weird weird smell which makes it harder to drink.

But what can I do? It’s prescribed so I gotta do it. Good thing is that I slowly learned to drink the herbal tea. I first started with half a cup until I eventually consumed the prescribed amount which is one cup.

I went back last Tuesday and I’ll have a separate post about it.