Even before I flew to South Korea, I was already monitoring the weather in Busan via the Weather Underground app which, by the way, is the most awesome weather app in my opinion. I kinda expected that my first day will be rainy but I was still hoping that I’ll be able to explore a couple of places despite the rain. I planned to visit Shinsegae Centum City which was registered at the Guiness Book of World Records as the largest shopping complex in the world. It’s just about a 30-minute subway ride from Seomyeon; both are in Line 2 so no transfers were needed.

However, because of lack of sleep during my flight and the subsequent transfer to Busan from Incheon Airport, I reached Seomyeon past lunch feeling exhausted and really sleepy. There’s a nearby Kyochon at my hotel so I had my lunch there and soon enough, I was dozing off at the hotel like a dead-tired puppy.

I set the alarm to give me enough time to go to Centum City but I was too tired that I didn’t even hear it! While some people are not deterred by the rain, I personally felt disappointed that I could not make the most of my first day because of it. But rather than stay at the hotel after getting that much needed sleep, I instead spent the rest of the day at the Seomyeon Underground Shopping Center. It’s a great place to hang out when it’s raining because it’s like going around the usual shopping streets but only at a subway station underground. 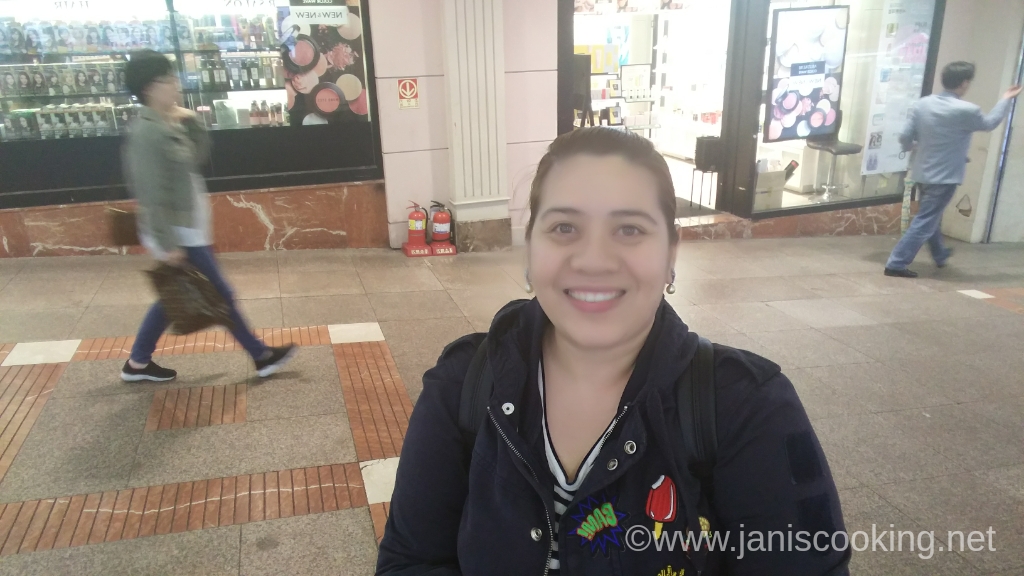 Seomyeon Underground Shopping Center is huge. It’s like the underground shopping mall of Myeongdong but I think this one is bigger. Seomyeon is a subway interchange for Lines 1 and 2 so it’s a pretty busy subway station. When I was choosing for my homebase in Busan, I was looking at either Nampodong or Seomyeon. I chose Seomyeon because it is as busy as Myeongdong or Hongdae in Seoul but can also give me the benefit of a subway interchange which means I can easily go to my desired tourist attractions without having to undergo too many subway transfers. 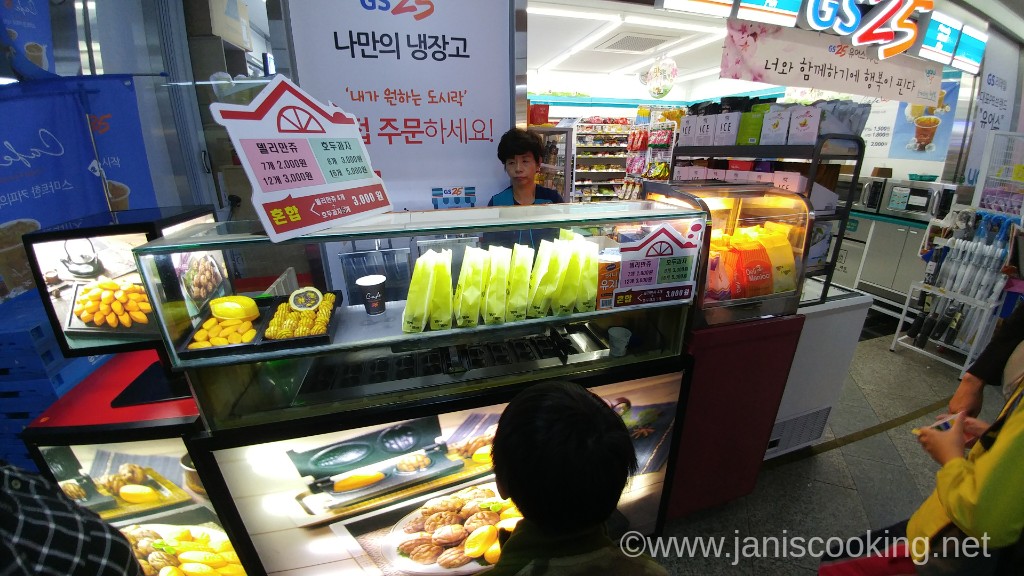 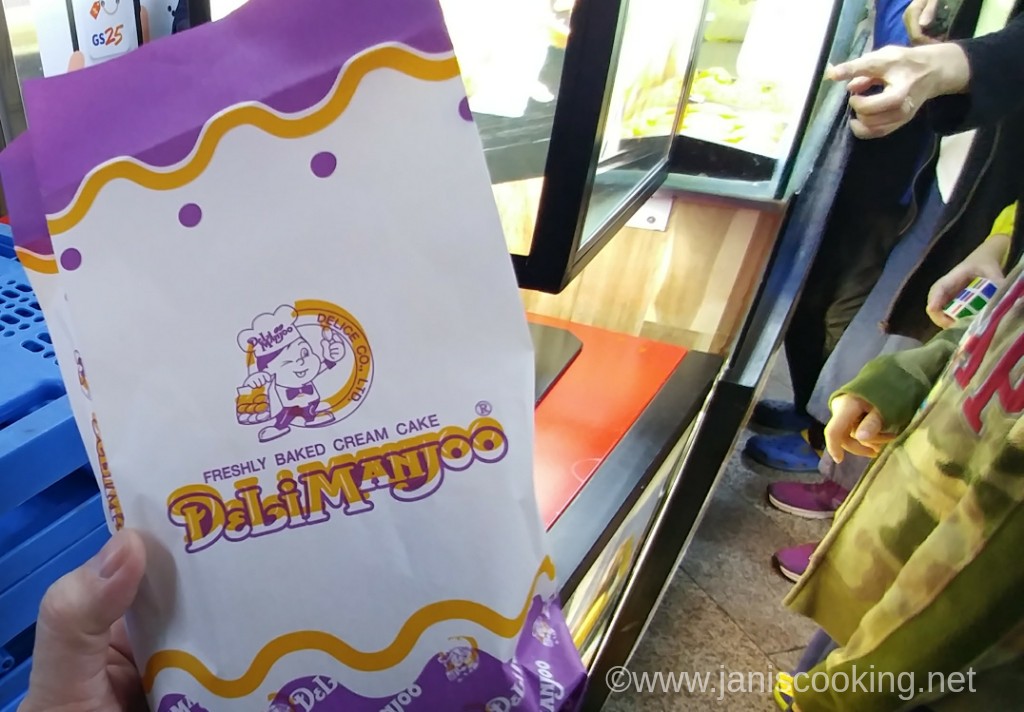 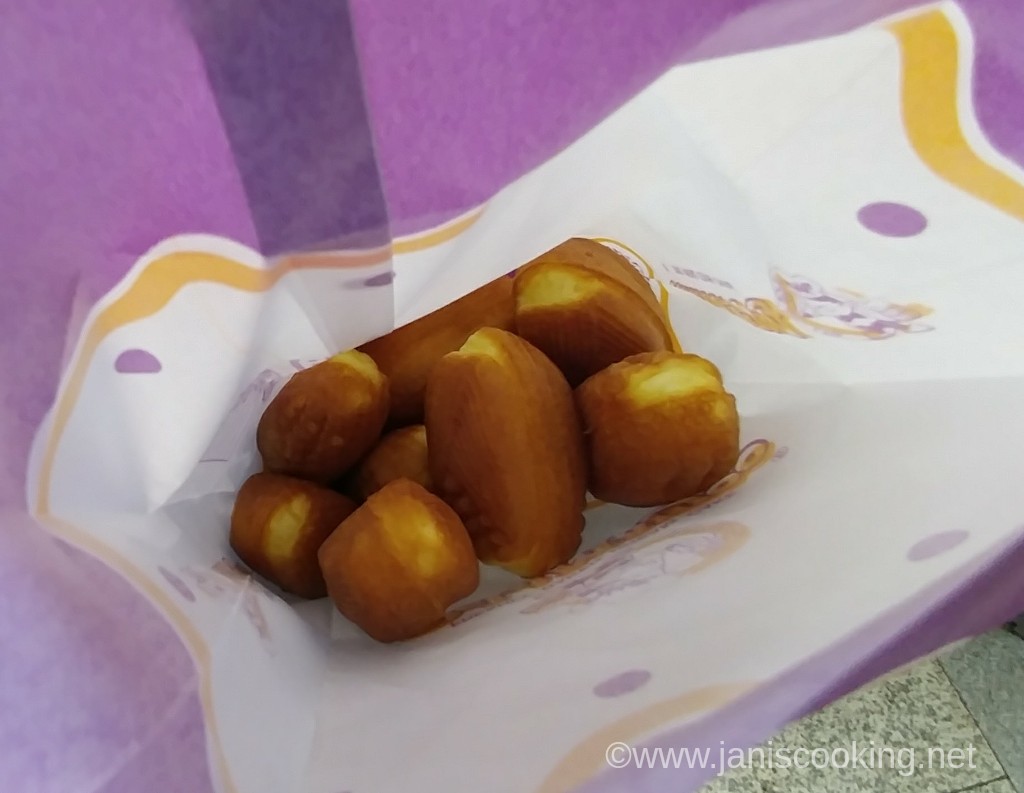 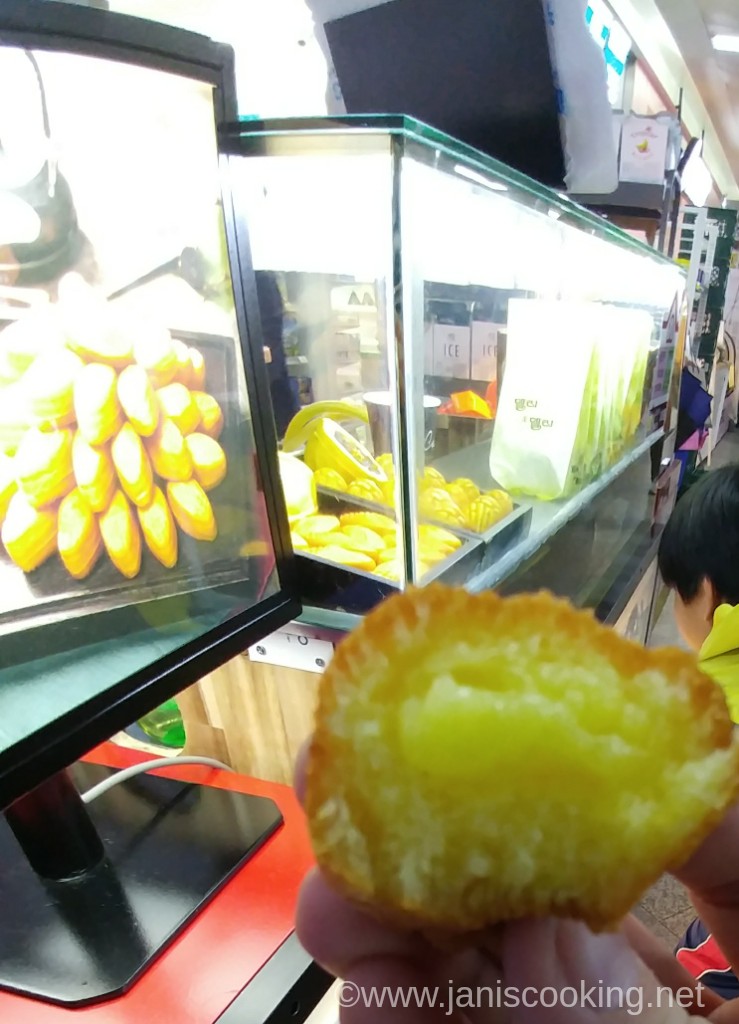 They say that it is a must to buy Delimanjoo when at a subway station in South Korea. I bought Delimanjoo while at Seomyeon Station and I instantly understood why it’s a must-buy. It was raining and cold outside, and the hot custard filling of that small corn-like pancake totally made up a delicious yet filling snack. If I remember it correctly, I buy one bag everyday when I was in Busan and it’s enough to take care of my morning and afternoon snacks. And do you know how much each delicious bag costs? Just 3,000won! 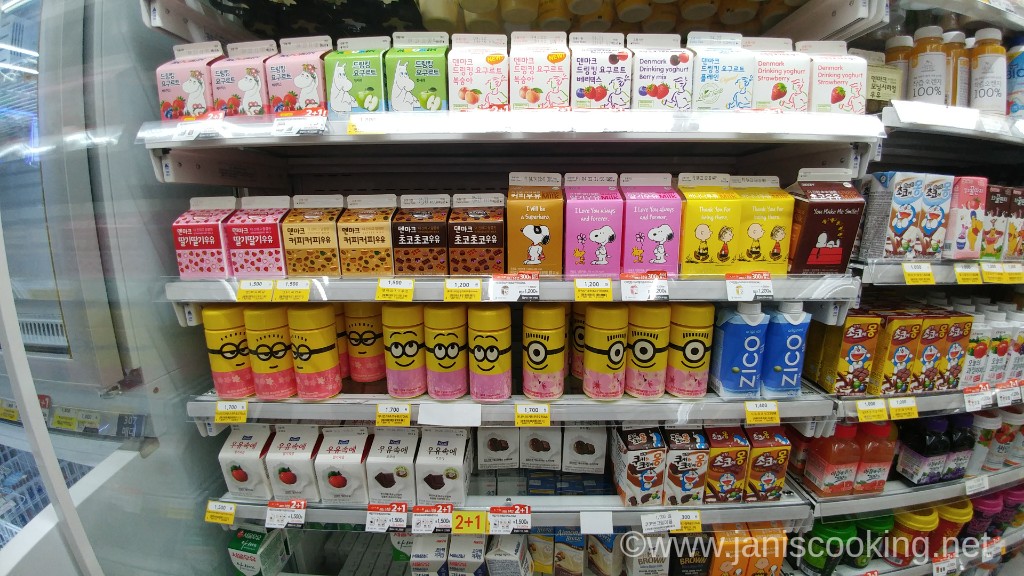 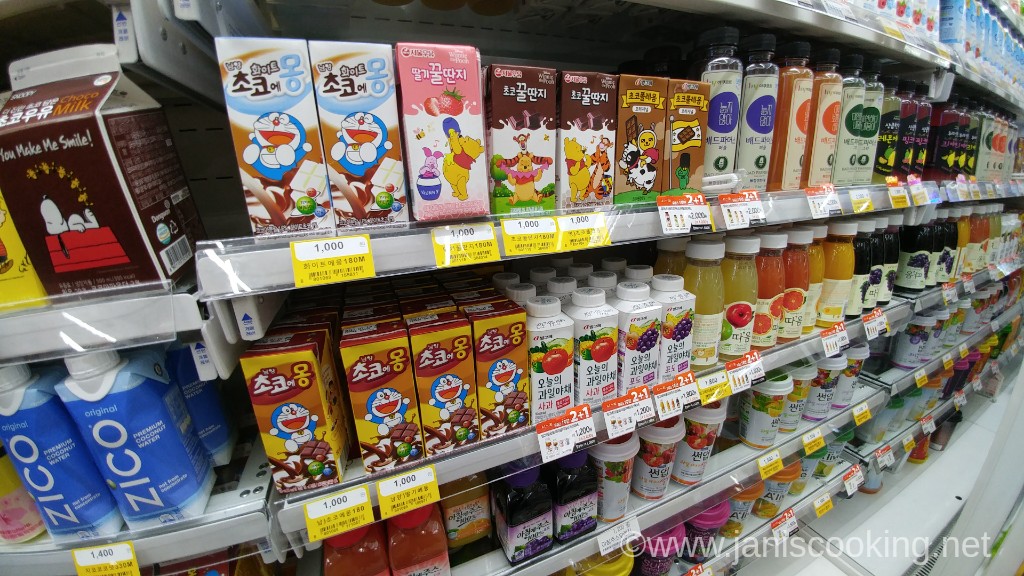 I stopped by at a GS25 to buy some bottles of water and Binngrae banana milk. GS25 is a convenience store brand in Korea like 7-11, Ministop, or Family Mart. I had to take pictures of the cute packaging of their drinks section. I think my son’s gonna love those minion drinks. I remember that in my previous visits to Korea, I usually hoard banana milk and bring some home. I don’t need to do that anymore. There are plenty of Korean stores in Metro Manila now (there’s even one near our new house!) so I can buy boxes of them whenever I am craving. 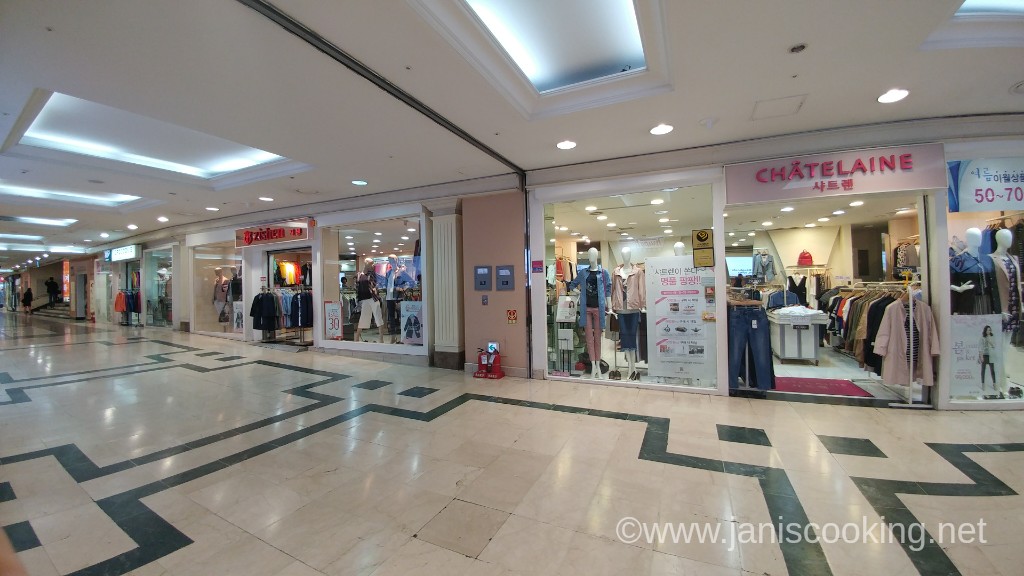 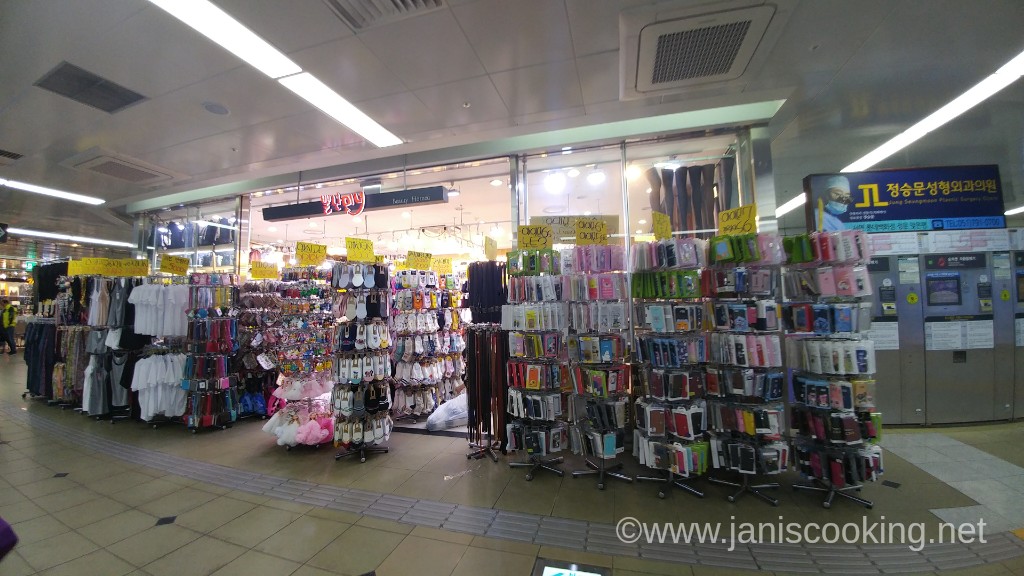 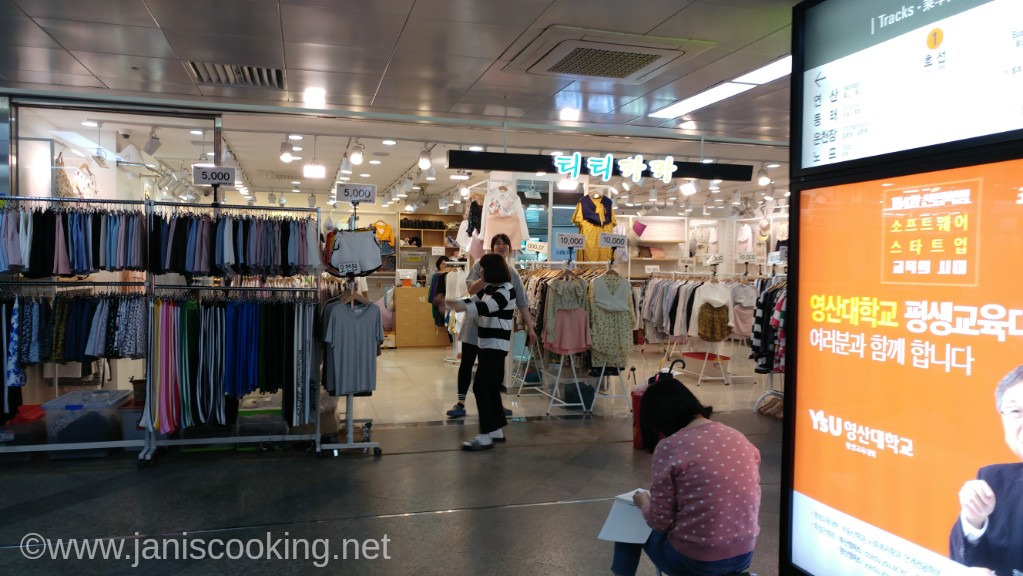 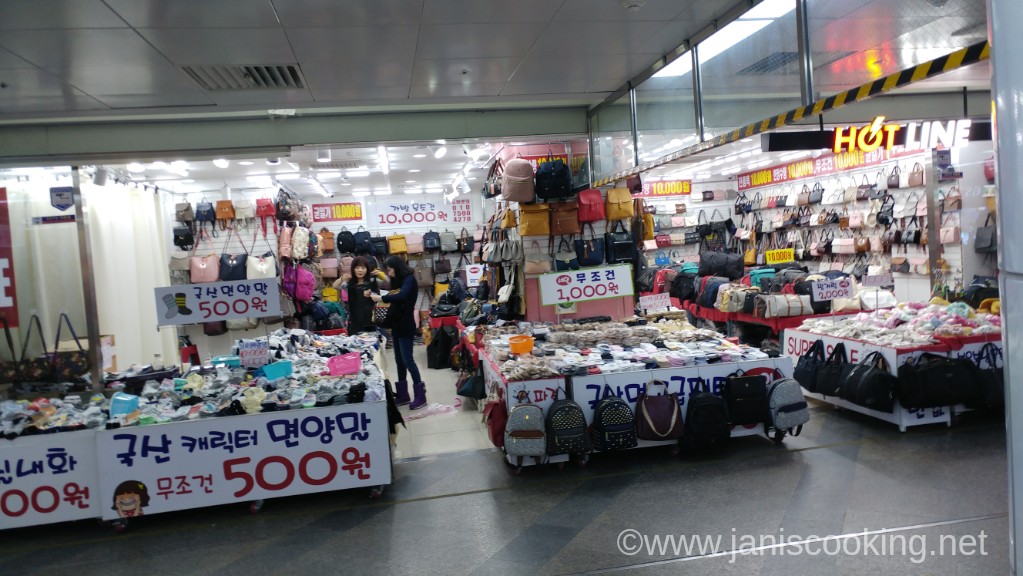 There are many shops at the Seomyeon Underground Shopping Center. You can easily find a good store that sells clothes, accessories, hats or caps, shoes, bags, socks, gadgets, cellphone cases, etc. 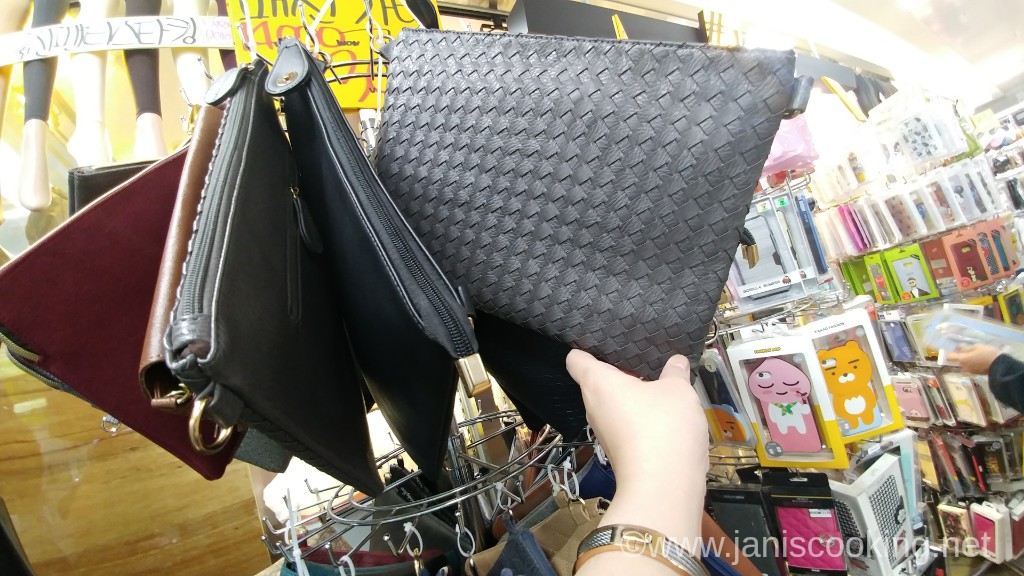 I spotted some cute clutches like this one which is a Bottega Veneta weave-inspired bag. The texture is really nice and the leather was soft. And the good thing about it is that it’s sold for only 14,000won or roughly P630 Philippine pesos! But I did not buy one. I ended up buying a Chicago Bulls cellphone case for my husband’s phone and you know what? The cellphone case was more expensive! 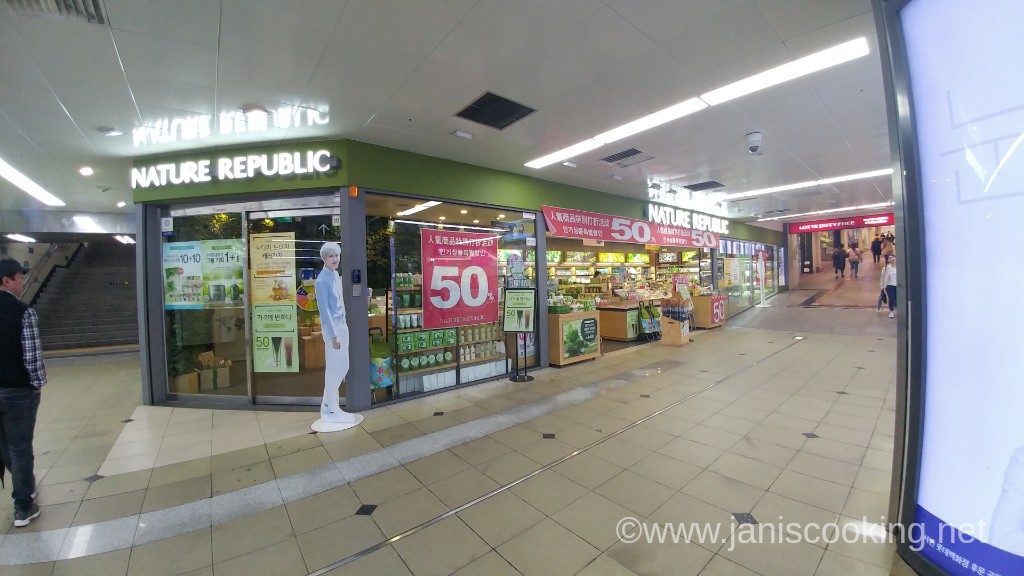 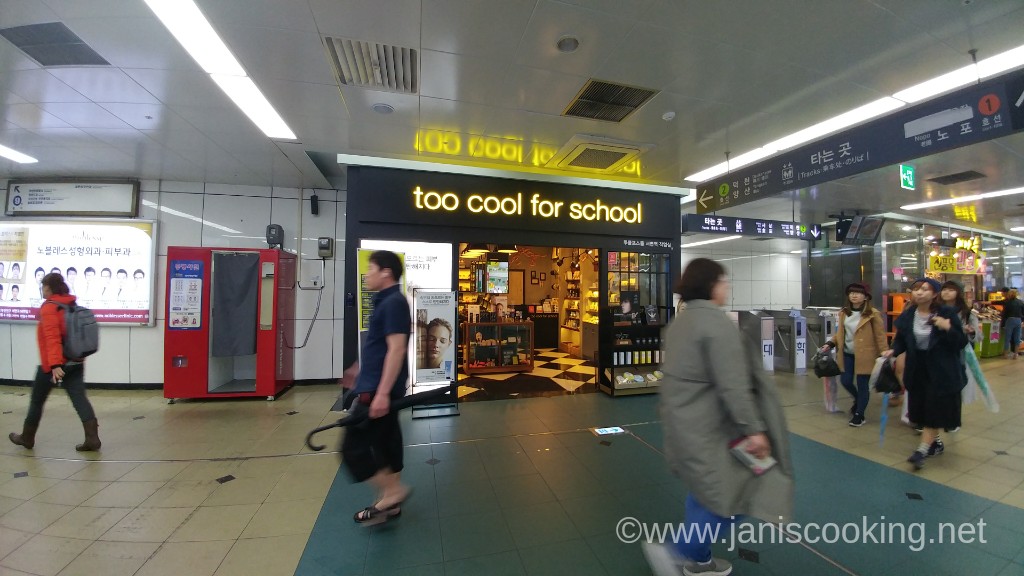 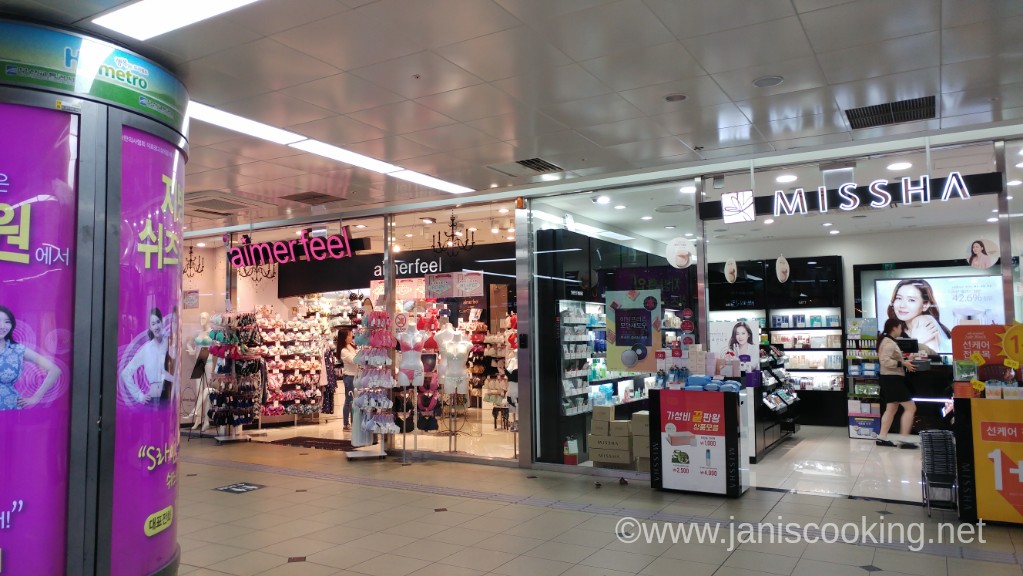 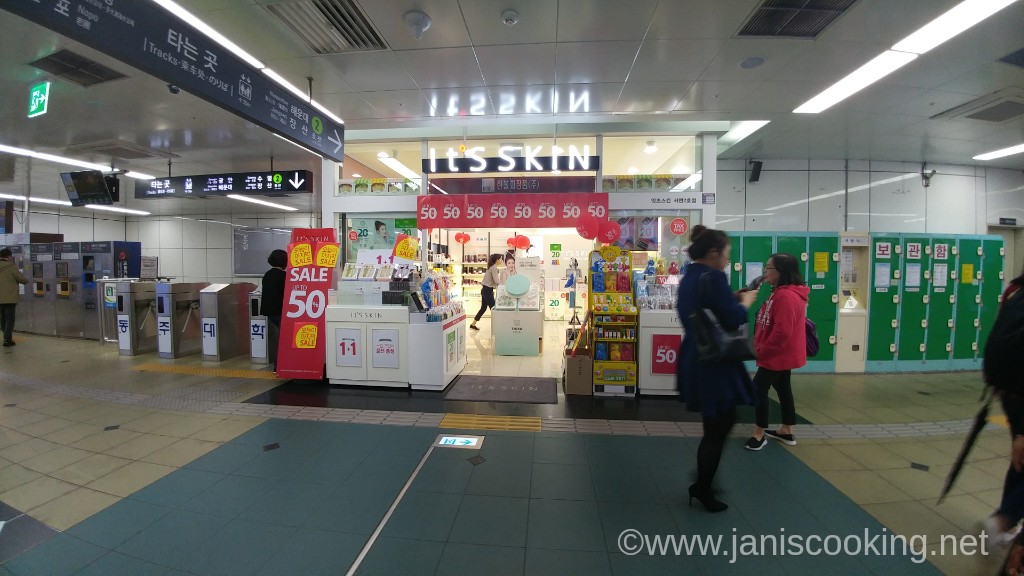 The popular cosmetic stores have a strong presence at the underground shopping center too. And like anywhere else, some brands have even more than one store. 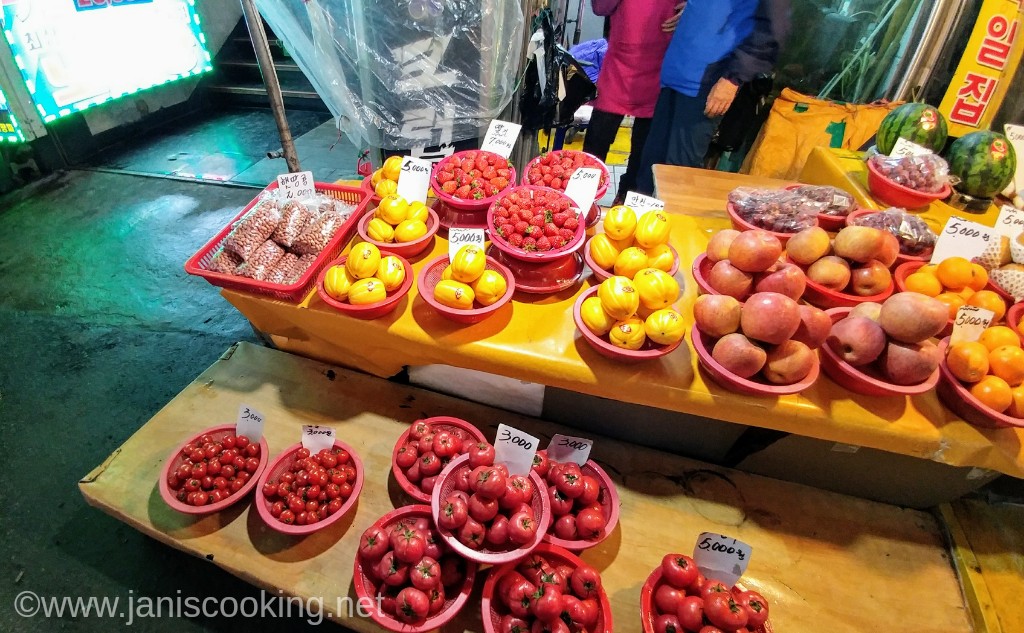 It stopped raining around 7:30pm and that was when I decided to get out of the station. Bujeon Market (coordinates: 35.16031, 129.0601) is so close nearby, like a block away from the hotel, so going back to my homebase meant seeing lots of fresh fruit stalls. It’s refreshing to transition to fruit stalls after seeing too many cosmetic stores at the underground shopping center. 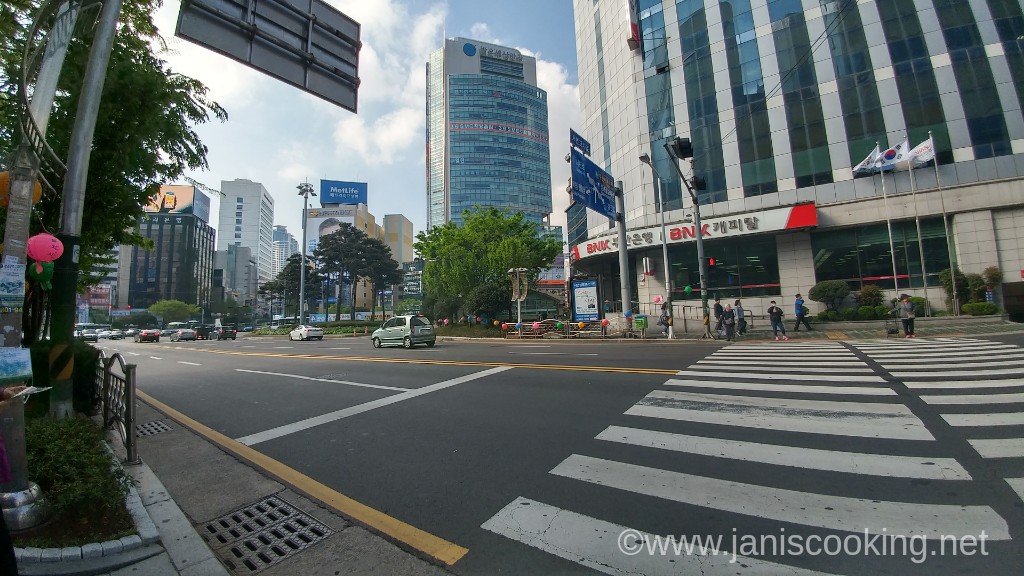 On a typical sunny day, my route in Busan always started with crossing that street towards the station. If you can see the tree to the left of the pedestrian crossing, that’s where Exit 11 of Seomyeon Station is. It has escalators going up and at the back of that is also an elevator. It’s so helpful knowing that certain exits have escalators or elevators because it’s rare commodity in subways in South Korea.

What I would have done if it wasn’t raining… 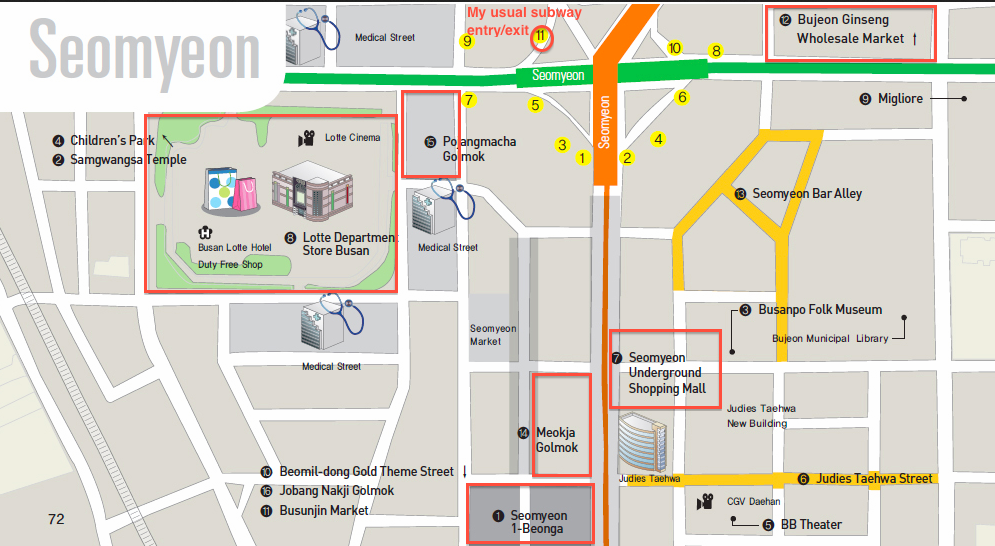 Aside from the Bujeon Market and the Seomyeon Underground Shopping Mall, there are so many other places of interest near Seomyeon Station and I planned to visit all of them on my first day. But since it was raining, I got to squeeze them in, one by one, during my free time on other days. But as much as I wanted to really spend time on each place, I was only able to pass by and  have a quick look.

One can easily go to Lotte Department Store Busan because it’s just two blocks away from Exit 7. Sadly, I didn’t have the luxury of time to explore Lotte Department Store even though I actually stopped by the Starbucks branch at the street before it, just a few steps away from Exit 7. There’s also the famous Seomyeon 1-Beonga or Seomyeon First Street which is a few meters away from Exit 1. I did not spend a lot of time there even though I had lunch at some of the restaurants across Exit 1 and I sort of explored that little pocket of stores near the bus stop to Taejongdae. 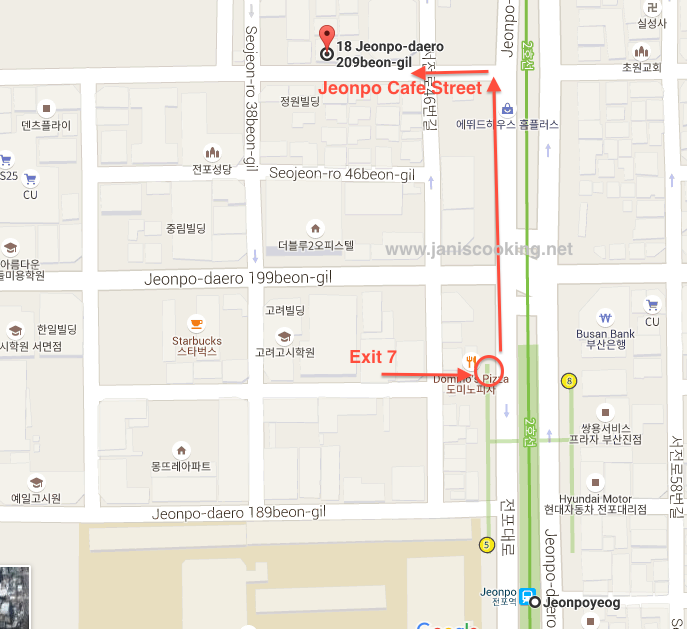 I also planned to visit Jeonpo Cafe Street but unfortunately, as I said above, I didn’t have enough time. I definitely will be back some other time and all these places that I missed will definitely remain in my checklist.